“hilarious … a side splitter…”Santasia” resembles what could happen if the “Kids in the Hall” crew got into Grandma’s kitchen and laced all the fruitcake with LSD.” – LA TIMES

“a 90-minute, Wonka-fied yuletide send-up of Hollywood blockbusters and celebrity culture that’s so riddled with lowbrow humor and clever social commentary that the nimble, six-man cast rarely come across as anything less than perfection. – LA.COM

A RELENTLESS ASSAULT ON YOUR HOLIDAY FUNNY BONE, THE CRITICALLY ACCLAIMED SEASONAL SENSATION IS STOCKING STUFFED WITH SNARK, SENTIMENT, DYSFUNCTION AND LOVE 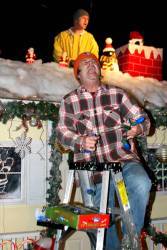 (New York, NY) – SANTASIA, L.A.’s hilarious holiday musical sketch comedy show that embraces and skewers all the iconic moments of the Christmas season will begin a limited engagement run in NYC at St. Luke’s Theatre, 308 West 46th Street in Manhattan beginning on Tuesday, November 17th. The official opening will be on Tuesday, December 1st and continue through December 23rd. Created by brothers Shaun and Brandon Loeser and directed by Tania Pearson-Loeser, the critically acclaimed seasonal sensation has run for over 13 years in Los Angeles and is jam packed with a biting blend of yuletide snark and sentiment.


SANTASIA’s relentless assault on your holiday funny-bone will have you hurting from laughter. Stocking stuffed with everything from dysfunctional family sketches to charm, wit, love and beautiful sentiment, it conjures up memories of your own Christmas past. The hysterical holiday classic has been compared to the “Carol Burnett Show”, “Kids in the Hall”, “In Living Color”, and “Saturday Night Live”.

Santasia is appropriate for children ages 13 and over due to strong language. Children under the age of 4 are not permitted in the theatre.

Tania L Pearson-Loeser (Co-Writer, Associate Producer & Choreographer) is a professional choreographer, actor and stuntwoman. She has choreographed for Conan O’Brien’s “Not Permitted to Perform on Television National Tour,” “Conan” and the “The Tonight Show” and has appeared in in the television series Chuck, Alice in Wonderland, Criminal Minds, Without A Trace, True Jackson VP, Pushing Daisies, Brothers and Sisters, Late Night With Conan O’Brien, General Hospital and Days of Our Lives.

Performances are on Tuesdays at 8PM and Wednesdays at 2PM.