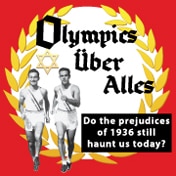 “Olympics Über Alles” tells the story of the 1936 “Nazi Olympics” when Jewish-American runners, Marty Glickman and Sam Stoller, became victims of hate-mongering. As Jesse Owens made the news, Marty and Sam, on the same U.S. track team went unnoticed as American and Nazi officials apparently conspired to bar them from the race of their lives. Why were these young men denied the opportunity to compete?

Fast-forward to the present. Follow a Jewish professor and a Catholic museum curator investigating the Glickman-Stoller incident while they struggle against the prejudices of their upbringing, search for the truth amid some murky Olympic history and find meaning in their own developing relationship. In this evocative new play, politics, religion, sports, relationships and the roots of World War II come face-to-face in a theatrical whirlwind that will challenge and inspire.