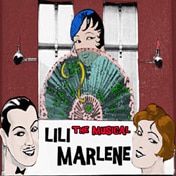 LILI MARLENE
A New Musical about a Family’s Escape
from the Rising Tide of Nazism
Wednesdays @ 2 p.m. thru June 6th , 2018

LILI MARLENE is the musical love story of Rosie Penn, a famous, Jewish cabaret singer and Count Hans Wilhelm von Kleister Graff, Set in Berlin during the last year of the Weimar Republic, and at the beginning of the Third Reich period ( as the dark clouds of Nazism loom) the Count, as the head of the passport bureau of the German foreign ministry, helps the German cultural and scientific elite escape from the country as he, his family and Rosie must decide where their futures lie.

Retiring after 45 years of practice as a tax lawyer, Michael Antin has devoted himself to music and the theatre. His teaching experience, as a Visiting Professor of law, at Boalt Hall School of Law, University of California Berkeley, and in numerous countries of central Europe, brings a special perspective to his playwriting. Michael played five instruments and student conducted the All-Southern California High School Orchestra before even getting to high school. Upon entering UCLA he joined the choir conducted by Roger Wagner and moved on to the Chorale. He was the only non-music major admitted to the music honorary fraternity, Phi Mu Alpha Sinfonia. Michael left music behind when he entered law school. When he retired in March 2008 from the practice of tax law, he resumed piano lessons and joined a choir. His piano teacher motivated him to write lyrics and to compose, resulting in a proliferation of songs. A cabaret singer heard some of his work and motivated Michael to write what became his first musical, “Answer the Call”. Additional experiences in getting to know people led to the further development and productions of the musicals Butterfly, Sophia, Renewal and Pillars of New York.

Mr. Lant is a 35-year veteran in the entertainment industry and has been involved in over 600 television, film, music tours, and theatrical productions as a creative director, consultant, and/or above the line entity. An award-winning producer, director, writer, lighting and set designer,