It Came From Beyond is a family friendly musical comedy described as Grease meets War of the Worlds with comic books, aliens, and 1950’s dancing.  It Came From Beyond opens Tuesday April 10, 2018 at St Lukes Theatre ( 308 W. 46 St.) To purchase tickets, click thru to TELECHARGE

It Came From Beyond takes place in a high school science classroom in 1959 and switches between two parallel stories. It centers on the nerdy, high school geek whose only chance to save the popular, beautiful girl that he loves, is to find the secret hidden in a new comic book called It Came From Beyond. In the parallel story, an astronomer seeks the same secret in order to stop an attack on Planet Earth from aliens from outer space.

The show has licensed film clips from 1950s sci-fi movies such as Invaders From Mars, Brain From Planet Arous, Hideous Sun Demon, Devil Girl From Mars, The Flying Saucer, and Plan 9 From Outer Space.

It Came From Beyond is a comedy with characters that you can root for, a plot that will take you in, and unforgettable songs destined to be standards that will have the audience singing as they leave the theatre. It is suitable for all audiences and has a positive message. 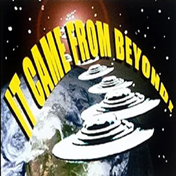 One newspaper described the play as Grease meets War of the Worlds. Comic books, aliens, 1950’s dancing, and its music couldn’t be more relevant with parody songs like “American Way,” “They’re Here,” “Find a Hero,” and “Are You One of Them?” playfully set against the backdrop of paranoid Cold War propaganda.

For More Information : It Came From Beyond

“hilarious ….the next Rocky Horror Show” – The Pasadena Weekly

“hysterical … the lyrics are a riot” – NYTheatre

* By popular demand, had its run extended at the New York Musical Theatre Festival.

It Came from Beyond – The Musical Cast Members:

It Came from Beyond – The Musical Creative Team